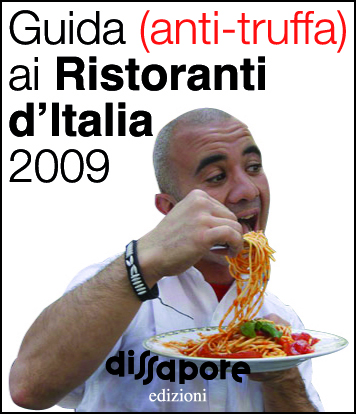 Recently a couple of Japanese tourists paid 695 Euros for a lunch at PASSETTO, a tourist-trap restaurant in Rome.  Since then, Italians have rushed to the aid of tourists in Italy, defending their rights.  Alright then, but who comes to the aid of Italians in Italy? Well, if we are asked for a 115 Euro tip, we don’t call the police first, we call the psych ward. To avoid this HitHimNowSinceYouAintGonnaSeeHimAgain attack in the future perpetrated by infamous tourist-traps, we have put together this helpful checklist. OK, here it is. Examine it closely point by point, using our DI (Danger Index).

1- The fishing waiter. DI: Avoid Like Bubonic plague.
A picturesque character constantly “reeling in” people outside of the restaurant. He will bewitch you with the promise of luscious feasts in your own language. Only to leave you unsatisfied with frozen lasagne and overcooked spaghetti.

2- The unwritten menu. DI: High. Cases of credit cards fainting under stress have been reported.
Do not trust that the waiter has your best financial interest at heart.  Ask for a printed menu, this is mandatory under the law. Prices must be visible, guaranteed by a notary public. Keep in mind that it takes a split second for a trained host to guess your income and work you accordingly.

3- The fixed price menu. DI: Elevated. Like your blood pressure after seeing the bill.
The only thing that will be fixed is the stunned look on your face when you look at your bill and see “Extra” for the coffee and the limoncello. What, did you think it was included? If those are the only extra charges on your bill, consider yourself lucky. Tourists have actually paid 10E for bread and 15E for napkins.

4- The “Fontana di Trevi” Menu. DI: Lethal. (Expecially for Japanese people). Equivalent of  “I Have A Bridge To Sell You” Menu. Harakiris often reported.
In many restaurants there are menus in different languages. Meaning, the 10E for a “cacio and pepe” plate of pasta served to Italians, becomes 30 for the “gullible American” and 40 for the “almond eye sucker”. Possible solution: ask for the menu written in Italian, tell them you need to practice the language.

5- Keep the change. DI: Chapter 11. (In Italy, to leave a tip isn’t mandatory. That’s because the price of taxes and service are already built into the menu and supplemented by the “coperto”  — a cover charge already listed on the menu. The owner pays the waiters a respectable salary, as opposed to the US, where they are paid minimal wages and rely more heavily on tips).
Well, it used to be “keep the change”. Now waiters can buy a bank collecting just three tips. Since tipping isn’t mandatory, the philistine hosts have worked out their own creative way around this. For example the waiters at PASSETTO have negotiated with Japanese tourists a 4-5% of the bill. Result:  a tip of 115E.

6 – Bread and service. DI: Moderate. Providing you know the ongoing market price of a baguette by heart.
It isn’t like this for the rest of Italy, but in Rome, the table, the cloth, the napkins, the chairs, the silver and the bread should be “price-less”.  (For everything else, there’s MasterCard).  In the Lazio Region (Rome) the adding of “Pane e Coperto” (bread and service) on the bill is illegal.

7- THE NotOnlyRestoPizzaBarLounge. DI: Hunger Inducing.
The croquette is burnt outside and frozen inside. The combination of lazy asses and improvised owners — a little-of-this-a-little-that — is frightening. With disastrous results for the accidental clients (as in: just suffered an accident). Signs to look out for:  clumsy when filling your glass with water, burnt coffee, frozen pizza. The ON button on the microwave oven is the only instrument in which the workers are proficient.

8- Fresh fish. DI: Beware of Sharks
A chapter, in itself, already fishy. The sea food offered as fare has almost always previously been frozen. In the case of combo fried fish plates, forget “almost”. If the fish is actually fresh, you will pay by weight, not by portion.  This means 50E for an anemic flounder. Your wife fancies lobster?  Give her a condo instead: it’s way cheaper. Oops, she’s not your wife?…

9- The bill. DI: Critical. How good are you with the third degree ala Sergeant Friday?
The bill is on the table. Read it carefully. It has been known to happen that the water turned into wine — as expensive as Brunello to be exact — although you were never invited to the Last Supper. If the bill looks suspicious to you, be calm, get your cell and call the carabinieri. See the host turn into a shade of what in Rome is known as PASSETTO green.

Well, you’re out and — incredible but true — you’re having a good time. So, what else? Oh, yeah, thanks to Dissapore, right?